With great pleasure we are announcing that GymIt has gone beyond normal measures and has installed the AirPHX system for the safety and health of everyone at GymIt. This device kills the Coronavirus and many other viruses and germs, both in the air and on all surfaces.This machine uses reactive oxygen and gas-phase hydrogen peroxide to continuously sanitize the air, and every surface the air touches. This effectively reduces all air and surface pathogens, to hospital standards, throughout the entire club.

GymIt is winning the war on germs!
Finally a quick, and easy solution to the incessant odors and bacterial incursion that are the bane of athletic spaces. A game changer, AirPHX® (pronounced air-fix) has been installed at GymIt. AirPHX eliminates bacteria, viruses and other harmful organisms and the odors they cause throughout the facility — in the air and on surfaces including: equipment, turf, rubber, foam, and tile. Bacteria, MRSA, C.DIFF, mold, Staph, athlete’s foot fungus, and norovirus — virtually eliminated in less than 60 minutes with the flip of a switch. In fact, testing of facilities before and after installation of AirPHX demonstrates reductions of airborne and surface germs >95%, even on hard to clean turf.

How does AirPHX technology work?
AirPHX technology generates clean air using a small wall mounted device that plugs into an ordinary outlet. Once mounted and the timer is set, the unit runs quietly using very little electricity. A “cold plasma” reactor kills bad SURFACE and AIRBORNE organisms organically and continuously, eliminating these bad organisms and
odors within the facility, even on hard to clean surfaces. One unit will treat up to 150,000 cubic feet, achieving better than hospital grade levels of cleanliness. And when the clean air circulates thru HVAC systems, AirPHX produces benefits throughout the entire
building!

For more information and to look at the science and validation studies behind airPHX please visit: https://www.airphxsports.com/

What does it eliminate?
• Coronavirus
• Influenza
• The Common Cold
• Norovirus
• MRSA and Staph
• Athlete’s foot
• Odors
• Over 30 common bacteria and
viruses and the odors they cause 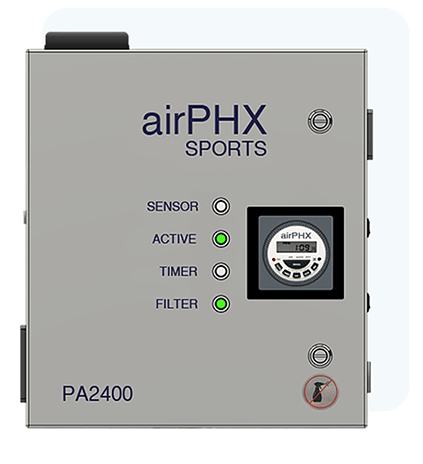